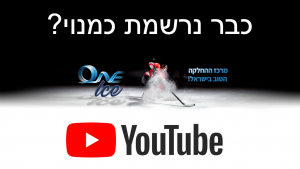 One Ice Group is the leading ice sports group in Israel, dedicated to promote these sports in Israel, through venues, academies and education.

We operate several initiatives in Israel:

The new ice arena is the most modern and advanced arena in Israel. The arena will be opened soon and will feature one NHL size and another smaller hockey rinks. The Arena is located 10 minutes from Netanya and approximately 30 min from Tel Aviv. It will be the home for our academies and will provides skaters, hockey players and everyone else with a highly professional ice rink.

A professional Figure Skating Academy, focusing on bringing up a new generation of skaters which will compete in world class events, as well as a large body of skaters around israel.

For further information, please drop us an email at : info@oneicegroup.com